Gluten Free Tips » What Are the Certified Gluten-Free Logos and Labels? Can You Trust Them?
120 shares 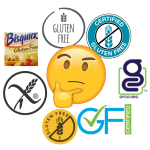 Most gluten-free logos, labels, or symbols are actually a claim, not an actual certification! Unknown to most people, gluten-free labeling does not mean the product actually went through a thorough testing and certification process. So not all logos are created equal, and only by choosing a certified gluten-free logo can celiac and gluten intolerant consumers be sure of the testing that has actually gone into the product.

Under most countries’ laws, gluten-free is only a voluntary claim that manufacturers use in the labeling of their foods

Just like the UL label in the US or the CE logo on products traded in the European Economic Area, gluten-free labeling is only a declaration, not necessarily a certification. This means the manufacturer claims to abide by the national GF ruling. That’s why you typically won’t find “official”, government-regulated logos.

So without a regulated gluten-free logo, manufacturers are free to display the label, logo, or symbol of their choosing.

Their gluten-free labeling can:

Obviously, you could think that if a manufacturer is found to be violating that claim, they could face heavy legal consequences and costly litigation. But reality shows that manufacturers are often found guilty of misusing the gluten-free claim, sometimes not even knowing what it entitles! Gluten-Free food labels aren’t as accurate as you may think (Huffpost). There are numerous gluten-free communities across the world actively maintaining (worryingly long) watchlists of wrongly labeled gluten-free products found to be actually using gluten-containing ingredients.

So when a manufacturer uses the gluten-free claim in most places they adhere to a limit of 20 parts per million (ppm) of gluten in their product and ingredient disclosure. 20 ppm (or its equivalent 20 mg per kg) is an international consensus on the lowest level that can be accurately measured in foods using scientifically validated analytical tools.

In the US, the Food and Drug Association (FDA) regulate gluten-free status by stating these voluntary claims must meet their regulations to use any gluten-free labeling in the US:

So since most regulatory agencies worldwide do not routinely test for gluten before a product claims to be gluten-free, testing and certification are done by third-party organizations. They require a set of guidelines to be met before the product can carry their logo. As of today, these logos are the only way for a consumer with celiac disease or gluten intolerance to be sure the product has been actually thoroughly tested and certified gluten-free by a third party.

While third-party gluten free certification agencies differ slightly in their testing standards, thresholds, and testing protocols, they generally all

Outside of GIG, the National Celiac Association claims even stricter testing down to detecting 5 ppm or less of gluten, which is just above the most sensitive commercially available testing (3 ppm). Their logo has been recently transferred to GFFP’s Certified Mark of Trust™, part of the Gluten-Free Recognition Seal Program, carrying out stringent third-party testing for the product, processing, and packaging.

3. Kitchens with Confidence by MenuTrinfo (10 ppm)

They certify food products for gluten content up to 10 ppm. Their logo can be found throughout the US, including dining halls.

Formerly the National Foundation for Celiac Awareness, Beyond Celiac Gluten Free Certification Program certifies up to 20 ppm of gluten content. Consumers can find their certified gluten-free logo in the US and Canada.

SCS is a body that certifies many different standards, among which non-GMO and organic products. They recently added gluten-free product certifications to their roster. They certify products to no more than 10ppm gluten.

The most recent addition, the National Sanitation Foundation offers a gluten-free certification test for products, with a logo that certifies 15 ppm of gluten or less.

While Canada imports many products from the US and therefore uses the same gluten free logos, the GFCP is the only voluntary gluten-free certification program for Canadian manufacturers. Products must be 20 ppm or less and use their logo.

The principal player for gluten-free certification in the United Kingdom is Coeliac UK who utilizes the Crossed Grain program, which includes three different variations on one logo that must be licensed from them.

Manufacturers wishing to use the certified GF logos must submit proof of product testing or gluten-free audit from SGS to Coeliac UK. They must also ensure that specific ingredients are excluded and prove that their manufacturing methods adhere to the regulations set up by the umbrella organization Association of European Coeliac Societies (AOECS), of which Coeliac UK is a member.

AOECS is a collection of 37 European national coeliac societies who have united to use the same logo and regulations that have been used previously by Coeliac UK. The crossed grain trademark is widely used by companies as a symbol of certified gluten-free status in Europe. As stated above, those using the logo must meet AOECS’s requirements of 20 ppm or lower gluten content, clear ingredient listing, and facility procedures.

It’s also becoming an international gluten free standard beyond just Europe. See the Australian certified logo below, which is just a variant.

You will find endless variants of the uncertified gluten-free claim on product packages. Here are a couple of examples of such labeling found across the world. All these labels are a voluntary claim from the manufacturer. They have not been tested and certified by a third-party agency. All captions depicted here are for illustration purposes and may be deposited by the brands using them.

Rest of the world

In conclusion: should I buy only certified gluten-free products?

Short answer: if given the choice, yes, absolutely. The certification is a guarantee that the product actually went through thorough testing and meets the regulatory thresholds. If not stricter. That’s especially true if you are hypersensitive to gluten (if you are among the few unlucky for which symptoms trigger as low as 4 mg of gluten per day)

Long answer: it depends on your risk tolerance and gluten sensitivity. For consumers in North America and Europe, a compliance claim may be all that is required to guarantee a certain degree of safety. Companies are routinely brought up on regulatory charges for mislabeling products or face legal action from consumers. Though legal charges the manufacturers may face are as limited as a simple recall.