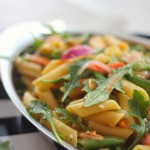 Oh my gosh y’all!  I have made a new favorite gluten-free dish and just had to share it right away!  I had something else planned for this post, but I had to back that up and share this gluten-free sweet and spicy garden pasta recipe with y’all instead.

I had recently stumbled upon Simply Suzanne’s and her Pappardelle with Spring Vegetables recipe which had been hanging out in the back of my mind.  I decided to try it out, with my own twist on it of course, and it quickly became my new favorite under 30-minute meal!

Okay, so here are a couple of my new favorite dish’s star-worthy positives: One, it’s delicious, which you probably assumed is the case since I am ranting and raving about it.  The sweet and tangy and spicy (from the crushed red pepper flakes) is a great combo for this light pasta dish.  Two, it took me 30 minutes to put this dish together.  That’s great news when you are running late for a concert! Three, this pasta and vegetable combo is great cold, hot, or in-between and it’s great as a main dish by itself or topped with your fav protein (we tried it with grilled chicken breasts and it was AHH-mazing).

I chopped up a whole mess of garden veggies and sautéed them quickly in a bit of butter and olive oil, just until the vegetables started to lose their crispiness.

After boiling up some gluten-free noodles, I added them to the veggies and an easy mix of vinegar, olive oil, and garlic.

While the pasta was cooking, I put together the sweet mascarpone sauce by simmering this sweet Italian cheese with some garlic, cayenne pepper, and chicken broth. 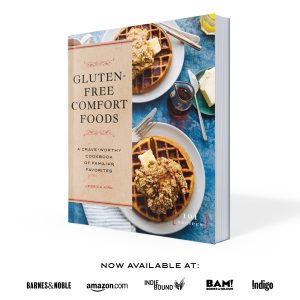