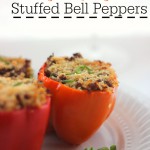 Do you have a favorite recipe that someone makes for you every once in a while, maybe your mom's homemade spaghetti and meatballs, or grandma's dinner rolls, and it just brings you to a happy place?  These same recipes are usually sacred and heavily asked for.  No one knows their ingredients, and no one ever will.

These spicy stuffed bell peppers are that ‘food’ for me.  Up until now, I had no idea how to make them, what the special magical tricks and ingredients were. They would sort of just show up in front of me every blue moon or so.

Until now…  Now I got the secret shared as to how to make the best stuffed bell peppers in the world.  Not only do I have them written down as my fav meal, now my parents ask for them too.  Once you get your paws on these bad boys, you’ll be asking for more too!

So without further ado, I give you this Spicy Stuffed Bell Peppers recipe….

After preparing the bell peppers, Hubby slipped them in a metal baking dish with a pool of water on the bottom and let bake.

Meanwhile, we prepared “the stuffing” which consisted of cooking the rice and spicy sausage and adding the spices all together.

After taking the bell peppers out of the oven, we stuffed each pepper to the brim with all the stuffing and then baked it a second time, but this time there is cheese involved….and it’s on top and turns golden brown.  It is seriously that easy and it is seriously that good.

Bless Her Heart Y'all is a participant in the Amazon Services LLC Associates Program, an affiliate advertising program designed to provide a means for sites to earn advertising fees by advertising and linking to Amazon.com. As an amazon associate, I earn from qualifying purchases.